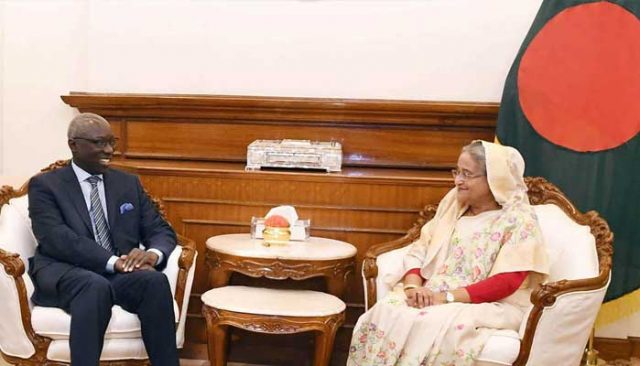 The United Nations will raise the issue of Pakistani genocide in Bangladesh in 1971 in the international forum, visiting UN Under Secretary General and Special Advisor on Prevention of Genocide Adama Dieng said today.

“Though some countries may oppose, we will raise the issue of Pakistani genocide in Bangladesh during the liberation war in the international forum,” he said while paying a courtesy call on Prime Minister Sheikh Hasina at her office in Dhaka this morning.

The premier recalled that the Pakistani occupation forces launched the genocide in Bangladesh on March 25 in 1971.

“Over three million people were killed and two lakh mothers and sisters violated by the Pakistani occupation forces and their local collaborators,” she said.

In this regard, Sheikh Hasina said Father of the Nation Bangabandhu Sheikh Mujibur Rahman rehabilitated the mothers and sisters who were violated during the liberation war.

The press secretary said the prime minister and the UN under secretary general discussed the Rohingya issue.

He said Adama Dieng described the Myanmar’s atrocities on the Rohingyas as a genocide and renewed the UN’s strong support to Bangladesh on the issue.

“The perpetrators of the genocide must be brought to justice,” Adama Dieng said.

The UN under secretary general urged the international community to put more pressure on Myanmar to bring back its nationals from Bangladesh.

“Bangladesh cannot solve the (Rohingya) problem alone and the international community should mount more pressure on Myanmar to solve it,” he said.

Adama Dieng said the UN wants repatriation of the Rohingyas to their homeland of Rakhaine state, and a peaceful and inclusive society builds up there.

The UN under secretary general highly praised Prime Minister Sheikh Hasina for giving shelter to over one million Rohingyas in Bangladesh. “You’ve opened the door widely for the Rohingyas,” he said.

Highlighting various steps for the welfare of the Rohingyas, Sheikh Hasina said the government is developing an island named Bhashanchar for their temporary shelter.

The prime minister thanked the international community for extending their helping hand on the Rohingya issue. While talking about the issue of terrorism and militancy, she said few incidents took place in the country, but the government tackled those in iron hand.