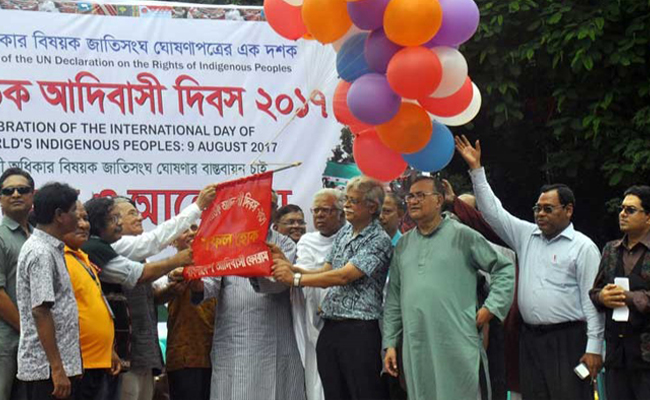 Bangladesh Adivasi Forum president Jyotirindra Bodhipriya Larma, better known as Santu Larma, on Wednesday urged all especially the young generation to strengthen the united movement against the persecution on ethnic and religious minority people. He called on them to foil the state-sponsored move of Islamisation of minority dominated areas. The movement has to be continued to realise same dignity and rights, said Santu, also president of Parbatya Chattagram Jana Sanghati Samiti.
Presiding over a rally, Santu was addressing at Central Shaheed Minar in Dhaka to mark International Day of the World’s Indigenous Peoples. He said there would be no existence of ethnic minorities unless the state became non-sectarian, democratic and progressive.
Civil aviation and tourism minister Rashed Khan Menon, who was the chief guest at the rally, said the Chittagong Hill Tracts Accord was done but peace has not been perpetuated there. The CHT Accord has not been implemented completely, he said. Land commission of the Chittagong Hill Tracts is yet to be effective while promise of complete withdrawal of army has not yet fulfilled, the minister said. He demanded to form a land commission to protect national minorities in plain lands against eviction from their land.