Rahman Khalilur spoke about ‘1971 Liberation War in Bangladesh, Crimes against Humanity & Genocide by Pakistan Army’ & Ansar Ahmed Ullah told the seminar that according to United Nations Human Rights Commission report Pakistan was responsible for one of the worst & most intense genocide in Bangladesh in 1971. But Pakistan has never acknowledged or accepted the crimes they committed against the civilian population of Bangladesh. None of the army Generals involved in the genocide has ever been brought to trial for their crimes. Unless those responsible are brought to justice a culture of impunity will prevail and the Pakistani military will continue to commit crimes against humanity. 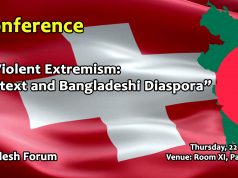