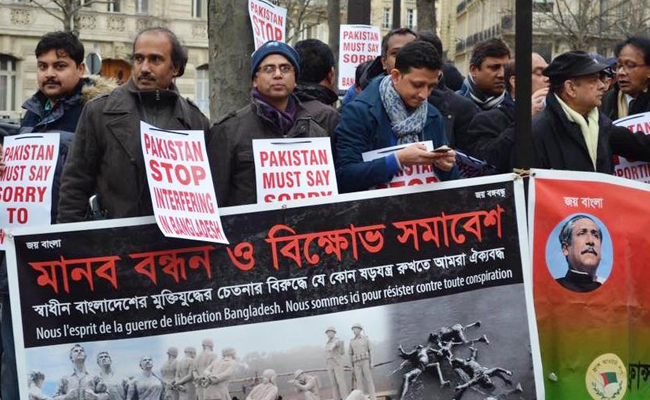 Paris: ‘We Pro-liberation Forces’, a group of Bangladeshis in France organised a protest demonstration in front of Pakistan embassy in Paris, om 9 March 2017 against the book, ‘Creation of Bangladesh: Myths Exploded’, written by Pakistani writer Junaid Ahmed. The book was published recently in Pakistan. The book according to the protesters, contains false and fabricated information about genocide, number of martyrs and torture of women by the Pakistani army during the country’s War of Independence in 1971.

Ruling Awami League lawmakers, including Prime Minister Sheikh Hasina strongly condemned the contains of the book during a discussion in parliament recently. Hasina said that she would ask the foreign ministry to lodge official protest against the contents of book. Responding to a question, Commerce Minister Tofail Ahmed said that the government of Pakistan owned the book as Inter Service Intelligence sent the copies of the book to the Bangladeshi High Commission in Pakistan. The ISI is the main intelligence agency of Pakistan, he said, adding that ISI tried to cause damage to Bangladesh on many occasions in the past.