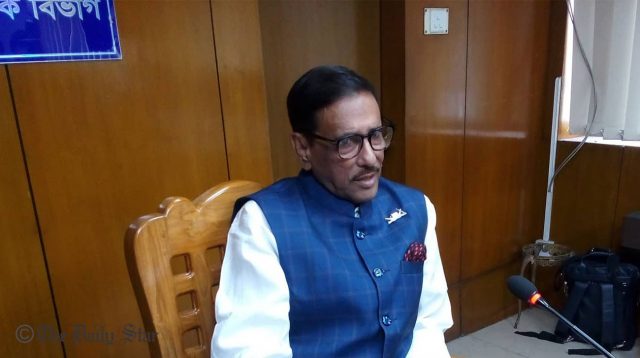 Saturday night’s bomb attack on police near the capital’s Science Lab intersection was possibly a test case before a big attack, a senior minister said yesterday.

“… now police are the targets, it cannot be said that ministers and lawmakers will not be targeted in the future,” Road Transport and Bridges Minister Obaidul Quader said, while replying to reporters’ queries at his secretariat office.

He said there was no reason to believe that militants had become inactive.

“They [militants] might not be that strong, but they are not inactive. They are secretly taking preparations possibly to carry out a big attack,” added Quader, also the ruling Awami League general secretary.

Talking to journalists yesterday, Dhaka Metropolitan Police Commissioner Asaduzzaman Mia said the bomb, used in Saturday’s attack, was an Improvised Explosive Device (IED) and that police were the targets.

“A criminal group exploded it,” he said, without mentioning any name.

He, however, pointed out that militants were annoyed with the police as law enforcers have weakened their network following the Holey Artisan attack in 2016.

Meanwhile, hours after the bomb went off around 9:20pm leaving two policemen injured, the Police Headquarters issued alert for all its units across the country.

“We earlier issued some specific directives regarding security measures, we sent messages yesterday again to all units to follow the directives properly and remain on alert,” Assistant Inspector General (media) at the PHQ Sohel Rana told The Daily Star last night.

Police did not officially say who was behind the attack, but several counterterrorism officials, wishing not to be named, said it was carried out by militants.

A Counter Terrorism and Transnational Unit official said the IED hurled on the policemen at a traffic police box was similar to the IEDs used in two previous attacks on police at Malibagh and Gulistan and those planted near police boxes at Khajurbagan and Paltan areas a few months ago.

Asked about the IS claim, the DMP chief said whenever an incident takes place, a few websites publish articles on claims of credit.

It is a matter of investigation to find out whether those claims are authentic or just propaganda, he said, adding that it was not the proper time to comment on the authenticity.

Whoever is responsible for the attacks will not be spared, he warned.

He also said it was not yet clear whether the bomb that exploded Saturday was a remote-controlled bomb, a time bomb or was hurled from a distance, he said.

Meanwhile, Sub-inspector Jahirul Islam, in-charge of the Science Lab police box, filed a case with New Market police station against some unknown criminals over the incident.

Shahabuddin with injuries in his legs was undergoing treatment at Dhaka Medical College Hospital. Resident surgeon at the DMCH Mohammad Alauddin said the policeman broke a small bone and was out of danger. A splinter was removed from his body through surgery.

Aminul who suffered injuries in his right-hand fingers was released from the same hospital after treatment.

Minister Tazul Islam’s vehicle had got stuck in gridlock a few yards away when Shahabuddin got down from his vehicle and went to the police box to clear the road. The bomb went off at that time.

Talking to reporters yesterday, Quader said police were investigating the incident and that they were alert.

“I have talked to the inspector general of police [IGP] and the [DMP] commissioner who confirmed that the bomb was hurled targeting the police, not the minister,” he said.

Regarding the IS claim, Quader said that he could not say anything about it, but it should be pondered upon if some groups were trying to use the name of IS.

On May 26, two people, including a female police officer, were injured after a bomb went off near a police pickup in the capital’s Malibagh intersection.

In another incident, two traffic police constables and a community traffic policeman were injured in a blast in Gulistan on April 29.

Similar IEDs were recovered from Khajurbagan and Paltan on July 23.

According to the CTTC, militant outfit “Neo JMB” was behind the attacks.

Some militants were arrested in connection with the attacks. Police need time to make any comment on Saturday’s attack, the DMP boss said while replying to a query.

At one point, he referred to the arson attacks carried out between 2013 and 2015 and said they would investigate whether the new attack was carried out following political patronisation or an attempt to bar trials of war criminals or some other important cases.

“We don’t think they [militant groups] have become desperate,” the commissioner said replying to another query.

Security was beefed up at all police establishments, including police stations, outposts, camps and traffic boxes in the city, the CMP said in an order.