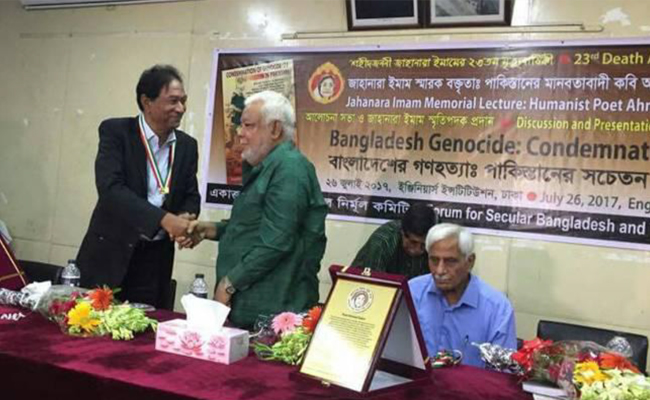 Dhaka: The visiting Pakistani poet and human rights activist, Ahmed Salim demanded trial of Pakistanis involved in the Bangladesh genocide of 1971. Poet Salim urged young people of his country to work so that the government of Pakistan could realise the atrocities committed against humanity in 1971 in Bangladesh and to apologize to Bangladeshi people. He said, the responsibility of the new generation of Pakistan is to bring the perpetrators of genocide to justice. Salim said that they will have to come forward to create public opinion on the issue of Pakistan government’s apology to the people of Bangladesh for genocide in 1971. (Photo: Poet Salim standing right is seen shaking hands with Major General (Retd) Abdur Rashid at the program. Abdur Rashid was speaker at the EBF conference in Brussels on 11 July 2017).
He made the above statements at an event at Engineers’ Institution of Dhaka recently at the Shahidjanani Jahanara Imam Memorial Commemorative Lecture and Memorial Medal distribution program. The program was organized by Ekatturer Ghatak Dalal Nirmul Committee.
On the occasion of Jahanara Imam’s 23rd death anniversary the medal ‘Jahanara Imam Smriti Padak’ is being given this year to a Punjabi poem to promote the message of non-communal spirit and humanity in South Asia. The Institute of Conflict, Law and Development also received the award for its contribution to creating awareness against militancy in the country. Poet Ahmad Salim went to jail for writing poetry against the massacre of Pakistani soldiers in 1971. In 2012, the Bangladesh government honored him as a foreign friend contributing to the War of Liberation. In the address entitled ‘Condemnation of Bangladesh massacre in Pakistan’, Poet Ahmad Salim said that poets of Punjab in 1971, wrote poetry in protest against massacre in Bangladesh, made statements in the newspapers, held meetings on the streets and went to jail for these reasons.
He was sentenced to six months imprisonment for writing poetry about Madhusudan Dey, owner of Madhur Kantin, and other martyrs who were killed by Pakistani army on March 25. Intellectuals Shami Kaiser, Dr Nuzhat Chowdhury and Tanvir Haider Chowdhury took part in the discussion. President of the Ghatak (killer) Dalal Nirmul Committee, writer and journalist Shahriar Kabir said in the introduction of the program that people of Bangladesh want recognition of genocide and that the time has some for Pakistan to seek state-level apology.