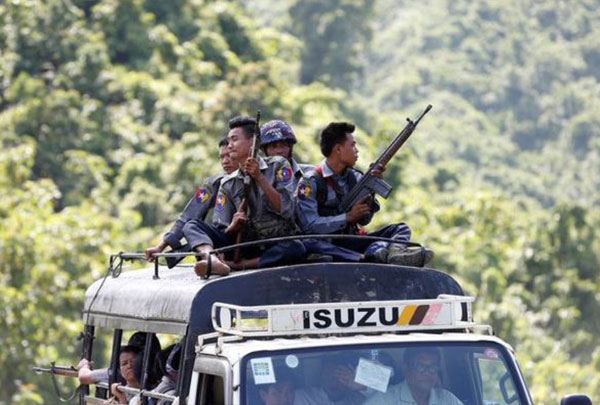 A Myanmar newspaper has pointed out a link between Pakistan and the radical group ISIS for the
latest wave of violence in Rakhine State that resulted in a fresh influx of Rohingya refugees into Bangladesh,
reports BD News24. The Mizzima newspaper, citing Indian and Bangladesh intelligence officials,
said in a report that “the intelligence intercepted three long-duration calls between Hafiz Tohar,
military wing chief of Arakan Rohingya Salvation Army (ARSA) on Aug 23 and 24, that hold the key
to why the militant group unleashed the pre-dawn offensive against Myanmar security forces”.
Nearly 125,000 Rohingya refugees have fled to Bangladesh since Aug 25 following an army crackdown
triggered by attacks by Rohingya insurgents in Buddhist-majority Myanmar’s northwestern
Rakhine State. According to the Mizzima report, the ARSA is determined to thwart
national leader Aung Sung Suu Kyi’s intentions to implement the Kofi Annan report
that recommended for a durable solution to the decades-old crisis.
“The ARSA wants to brutalise the discourse in Rakhine and help re-militarise the area so
that the narrative of torture and extra-judicial killings help them boost the level of jihad
and find recruits,” the report said citing a top Bangladesh intelligence official who was not
named. “Hafiz Tohar set up the Aqa Mul Mujahideen (AMM) and was trained in Pakistan by the
dreaded Lashkar e Tayyaba (LET) after he was recruited by Abdul Qadoos Burmi, the chief of Harkat
ul Jihad al Islami -Arakan (HUJI-A) from Kyauk Pyin Siek village of Maungdaw in 2014,” according
to the report. He merged his group into the ARSA after it was formed in the summer of 2016 and is
widely believed to be behind the deadly attacks on Myanmar security forces from October 9-10 last
year and on Aug 25 this year.
Following the training of a few initial recruits of the AMM in Pakistan, new cadres were recruited
from among Rohingya youths in Rakhine and refugee camps in Bangladesh’s Cox’s Bazaar. They
were then trained in camps set up on the Bangladesh-Myanmar border, especially one at Naikhongcherri
in the Chittagong Hill Tracts of Bangladesh, Mizzima said. One “Major Salamat” of Pakistan’s
Inter-Services Intelligence, deputed for undercover operations with the LET, was responsible for these
training during April-May 2016, according to the report.