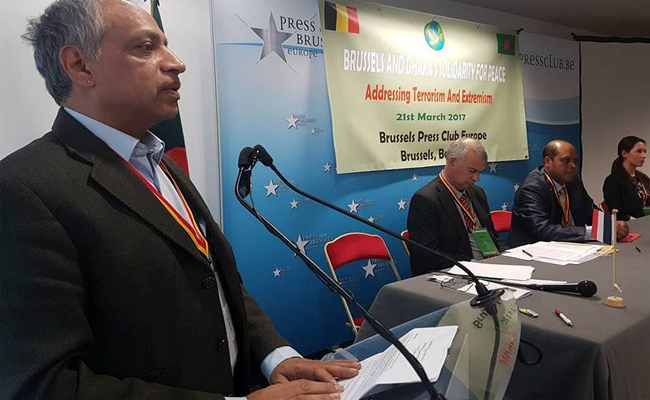 European Bangladesh Forum had organised an international conference in Brussels on 18 October 2017 with participants from Bangladesh, the UK, The Netherlands, France, Sweden, Switzerland and Belgium. The conference was held in the backdrop of an Islamist hostage taking and attack in Dhaka on 1 July 2016 where twenty-four innocent people including nine Italians & seven Japanese citizens were brutally killed. This attack in Bangladesh was followed by similar attacks in the Middle East, Europe, US and Turkey claimed by the ISIS. It was in this backdrop the European meeting in Brussels was held to discuss the ways to understand as to why young European Muslims were being drawn to extremism. One of the reasons the conference was held in Belgium was because of the concerns of the number of Europeans who had gone to Turkey & Syria to join the ISIS.

Brussels conference concluded that without understanding the theories of Islamism, without an effective counter-narrative, it will be impossible to eliminate terrorism. The philosophy of Islamist terrorism is deeply rooted in the writings of Abul Ala Maududi, founder of Jamaat-e-Islami, Hassan al- Banna, founder of Muslim Brotherhood and Sayyid Qutb, leading member of Muslim Brotherhood of Egypt. Militants take up Islam as a political ideology and a way of life. They have an orthodox interpretation of religion, are opposed to the secular values, maintains transnational jihadi connections and view militancy as a legitimate means to attain their goals. Many in Europe are surprised to discover the identity of Islamist killers who had come from well to do backgrounds, studied well and to an extent were integrated. There is a stereotype that Islamists, are from a poor background, often victims of society who does not accept them and does not offer them sufficient opportunities. But the reality is that less than 2% of the terrorists are illiterate. A recent study examining the economic situation of countries that supply ISIS with recruits have discovered that ‘the richer the countries are the more likely will provide foreign recruits to the terrorist group.’

Some of the British terrorists who joined the ISIS came from wealthy families and prestigious schools in the UK. The mastermind of the kidnapping and killing of the American journalist, graduated from the London School of Economics (LSE). The person who drove a jeep full of explosives into the Glasgow airport, had been president of the Islamic Society at Queen’s University. The failed terrorist of Times Square in New York, was the son of a high official in the Pakistani military. The twentieth man of the 9/11 attacks, had a PhD in International Economics from the London’s South Bank University. The Islamist who wanted to blow up a commercial flight, studied optometry at London University. The terrorist who prepared the bombs in Bali, studied at the University of Reading.

Britain’s MI5 revealed that ‘two-thirds of the British suspects have a middle-class profile and those who want to become suicide bombers are often the most educated.’ One of the suicide bombers of 7 July 2005, studied at Leeds Metropolitan University. One suicide bomber had a scholarship at King’s College before carrying out attack on Tel Aviv’s seafront promenade in 2003. 15 of the 19 suicide bombers of 11 September came from prominent Middle Eastern families. One was the son of a lawyer in Cairo. The one who crashed Flight 93 in Pennsylvania, belonged to one of the most affluent Lebanese families.

A report on British multiculturalism published in May last year stated that one-third of Muslim adults in Britain do not feel ‘part of British culture’ and nearly half (47%) of Muslims consider their Islamic faith to be the most important part of their identity. In September, last year the Guardian newspaper reported that young Muslims living in Rochdale are increasingly turning to anti-Western sentiment and extreme interpretations of Islam. Muslim leaders interviewed by the paper described a ‘disturbing trend’ of young Muslims adopting more fundamentalist beliefs on key social and political issues than their parents or grandparents. In December 2016, a UK government-commissioned report said that Muslims living in the UK are increasingly identifying with a global Islamic “Ummah” community, rather than with being British.

It’s this sense of lack of belonging that is driving many young to Islamists to be part of a larger global community i.e. the Ummah. Amongst Bengali young people many appear to be keen in identifying themselves as Muslim. This was evident in a British academic research when he talked about Muslim identity. He stated the Bangladeshi participants often prioritised their Muslim identity. For Muslims living in a non-Muslim environment raises a number of dilemmas both externally and within, because strongly held Muslims values and customs are constantly being challenged by living as a minority within a majority Christian society of Europe. This dilemma of identity is being exploited by the extremist groups who appear to be providing a belonging to a wider global community. While the current social, economic and political conditions are pointing towards the foregrounding of a Muslim identity, it does not stand alone from other identities. The assertion of ethnic cultural identity and exposing European Muslims to their parents’ heritage may halt the flow towards extremism.