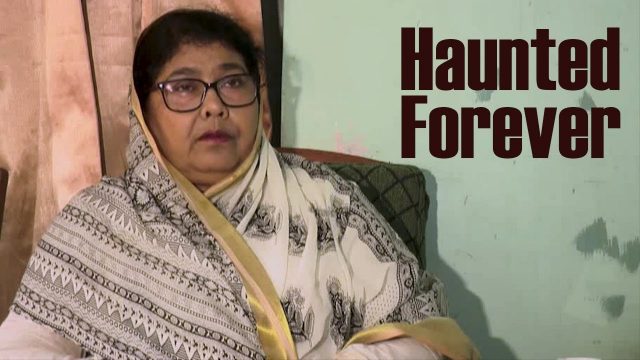 The family of Abdur Rab Serniabat, Bangabandhu’s brother-in-law and a minister, had just finished dinner at their 27 Minto Road residence on August 14, 1975.

After the dinner, Serniabat was talking to his son, daughter-in-law and nephew — Abul Hasnat Abdullah, Shahan Ara Begum and Shaheed Serniabat — in his room, discussing the country and its prospects.

“I still remember my father-in-law telling his sons about how the country could prosper. He was stressing the need for cooperatives for a poor country like us. But who knew it would be his last night with us?” Shahan Ara said, as she recounted the impending bloodbath that took place in that dark night to The Daily Star.

Shahan Ara hit the bed sometime after 12:30am. She and her two sons were in one room while her daughter in another. She, however, did not know exactly when the father and the sons had finished their conversation and went to sleep.

All of a sudden, she woke up to a hail of gunfire, baffled. A fierce sound of gunshots broke the silence of the night. A hail of bullets started coming from all directions.

She and her sons ran to her father-in-law’s room where all other members of the family had already been gathered; all bewildered by the turn of events.

Her mother-in-law asked her husband to call up her brother, Bangabandhu Sheikh Mujibur Rahman, and tell him that robbers attacked their house. But what came from the other side of the telephone was not clear.

Moni picked up the phone.

“‘Some people have attacked our house, please do something’, I told Moni bhai. He asked me whether they were in uniform. I told his there was no way to see that as bullets were raining down,” said Shahan Ara.

Impatient, her mother-in-law once again insisted her husband to call Bangabandhu.

“It seems your brother has not been spared either,” Serniabat told his wife.

Moments later, they heard sounds of stomping of people climbing up the wooden staircase. Their house help locked up the room.

Abul Hasnat, however, was not inside the room.

“I heard his [Hasnat’s] voice several times, warning those people not to come any further. I don’t know where he went then,” said Shahan Ara.

But it seemed that the attackers knew the house well.

Breaking the glass door, they barged into the room and shouted: “Hands up!”

They took no time to destroy the telephone set. Then they made all of them come down to the ground floor, with everyone’s hands up.

They took them to the drawing room.

“Who are still upstairs?” asked one of the army men.

“I don’t know who they are,” replied Shahan Ara in presence of Abdur Rab Serniabat.

At the moment, she could read the expression on her father-in-law’s face: “don’t tell who are inside the house.”

The thought of Bangabandhu came on her mind, giving her courage.

That very dark night, the biggest bloodbath took place at Bangabandhu’s house in Dhanmondi 32. Some disgruntled army officers assassinated Bangabandhu Sheikh Mujibur Rahman and his entire family, except for Sheikh Hasina and Sheikh Rehana, who were abroad then.

The scene at the 27 Minto Road was changing fast.

Abdur Rab Serniabat asked the attackers who was their commanding officer.

“What do you want? Why have you come here?” said Serniabat.

“We have no commanding officer,” the reply came.

Shahan Ara was holding her 10-month-old son Sadek Abdullah (the newly elected mayor of Barisal city) in her lap. Her elder son Sukanta Babu climbed down the staircases to his mother, asking her to take him on her lap.

“Since Sadek was already in my lap, I could not take him [Sukanta],” she said.

Then Shaheed Serniabat held Sukanta in his arms.

As the attackers assumed that all the family members were present in the room, they opened fire.

Being shot, Shaheed tumbled down on his face with Sukanta underneath.

Serniabat was hit in the chest and Shahan Ara on the back.

The attackers left the room. As they were about get in the vehicle, someone who was not hit by bullets started shouting from inside the house.

Abdullah] in my lap. I lied down behind my father-in-law’s back. Four to five bullets hit my side.

“My father-in-law fell on the ground,” she said.

After a while, some policemen came from Ramna police station. They started searching for Abdur Rab Serniabat.

Shahan Ara came to know later that one of their security guards had called the police.

The police officials checked her father-in-law’s pulse and dropped his hand.

Her husband Abul Hasnat came down from the upper floor. He hid himself in the bathroom. The army had gone there, but they did not find him because of the darkness.

Hasnat took his father’s hand to check the pulse, but dropped the hand soon.

Shahan Ara asked her husband to see the condition of Sukanta Babu. He pulled Shaheed in order to separate Sukanta. Suddenly, a groan gushed out of his chest, as if he breathed his last.

Nayeem Khan Rintu were all dead.

“I cannot forget their face to this day. Moments ago, they were having a chat, now they are all dead and cold,” Shahan Ara said.

[The story is based on an interview with Shahan Ara in August last year at her Kalibari Road house in Barisal.]