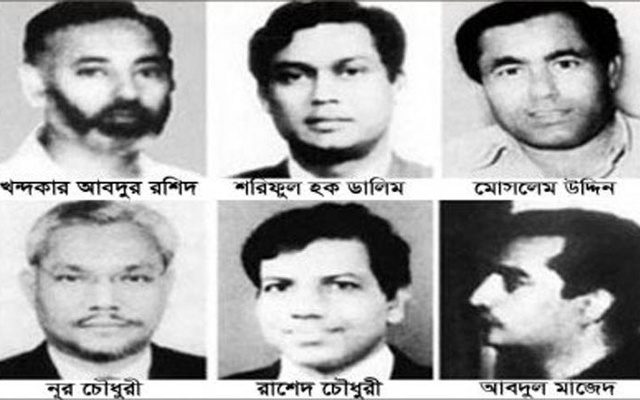 It has filed two separate cases in the US and Canada courts to repatriate M Rashed Chowdhury and Noor Chowdhury, the Awami League general secretary said during an event at the Dhaka University campus on Monday. “The government has intensified its efforts to bring back the six assassins now absconding. Rashed Chowdhury is in the US and negotiations are ongoing on to repatriate him; the US government is helping us,” said Quader.

“The government has filed a case in Canada to reconsider the Canadian law preventing capital punishment and repatriate Noor Chowdhury. Discussion between both governments are ongoing,” he said. Four years after Bangladesh’s independence, the Father of the Nation Sheikh Mujibur Rahman and most of his family members were brutally killed on Aug 15, 1975 by renegade army officers.

His daughters Sheikh Hasina and Sheikh Rehana survived because they were abroad at the time. Of the 12 convicts, five were hanged on Jan 28, 2010, one died of natural causes and six more are absconding. The six convicts still at large are Abdur Rashid, Shariful Haque Dalim, M Rashed Chowdhury, SHMB Noor Chowdhury, Abdul Majed and Risaldar Moslemuddin. Interpol has issued a red notice against them.

“The BNP has never answered my questions regarding who had been involved in Bangabandhu’s assassination. Why was the indemnity ordinance necessary to stop the trial of those killers? I’m repeating my questions again,” Quader said in the event. Canada, being a civilised country cannot become a refuge to the self-proclaimed killer, said former foreign minister Dr Dipu Moni.

“The assassin, along with his accomplices, killed the founding father of the country, along with 18 of his family including his wife and 10-year-old son Sheikh Russel. The killer has been living free for the past 43 years.” She urged the Canadian government to repatriate Noor Chowdhury so the self-proclaimed convicted killer can be hanged, which would ensure the Canadian government’s commitment to uphold the rule of law and human rights.