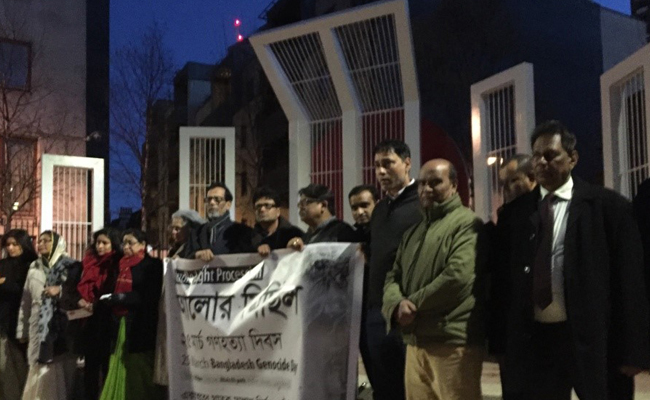 The UK Nirmul Committee and pro-liberation Bengali diaspora in the U.K. remembered the genocide of the dark night of 25th March, 71 in a ‘Light Vigil’ on Saturday 25th March, 6pm at Central Shahid Minar, Altab Ali Park, East London.

People who gathered in Altab Ali Park in East London paid homage to those who lost their lives on the night of 25th when the Pakistani military launched assault on the innocent un-armed Bengalis of the then East Pakistan. In addition, the event reiterated the quest to seek justice for the victims of ’71 war & to demand the completion of trial of all war criminals including Pakistani military personnel who carried out genocide of innocent millions.

Nirmul Committee’s vice president Ishaque Kajol brought the event to an end by saying that the genocide carried out by Pakistani military on the night of 25 March was one of the most brutal in the world. The Nirmul Committee has been commemorating the killings of innocent on the dark night of 25 March by holding annual ‘Light Vigil’ and has been demanding that 25 March be declared as ‘Genocide Day’. He welcomed the decision by Bangladesh government and congratulated PM Sheikh Hasina for officially declaring 25 March National Genocide Day.