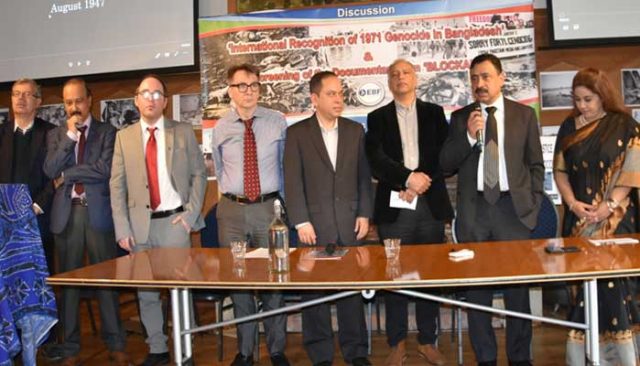 London: The Bengali community in Europe is stepping up efforts to have Pakistan’s actions in Bangladesh in 1971 recognised as genocide.

Activists gathered outside the International Criminal Court in the Hague in the Netherlands on March 23rd, calling for international action.

They say that more than three million people were killed when the Pakistani Army used force to suppress an independence campaign. They also say there was widespread sexual violence against women, including rape.

“Bangladesh cannot move forward until it faces its past,” said Shomi Kaiser, whose father was killed by the Pakistani army when she was a child. “The fight for justice is a long battle,” she said.

Ms Kaiser said it was appropriate to focus the campaign on the Hague because it is regarded as “the city of justice” due to its history of court cases trying crimes against humanity.

Dr Wolfgang-Peter Zingel, from the University of Heidelberg in Germany, told the European Bangladesh Forum: “The genocide in Bangladesh was not an accident of history.”

Drawing comparisons with the Holocaust of Jews by the Nazis, Dr Zingel warned: “If you want to prevent such atrocities happening again, you must look in detail at their causes and record them.”

British political analyst Chris Blackburn said international cooperation was the best way to respond to human rights violations and noted that many of the issues from 1971 are still relevant to South Asia.

The event in the Hague included the screening of a documentary film entitled “Blockade” which examined the response of the peace movement  to Pakistan’s violence in the early 1970s.

The film’s director, Arif Yousuf, said he wanted to highlight the support by the United States government for the Pakistani army at that time, which he said was part of President Nixon’s strategy to contain Communism in Asia.

The Bangladesh Ambassador to the Netherlands, Sheikh Mohammad Belal, said: “No other country should face the injustice and trauma that Bangladesh has endured.”

The date falls on the anniversary of the start of Operation Searchlight in 1971, which marked the start of military actions in what was then known as East Pakistan.

The nation was renamed Bangladesh after independence was declared later that year.