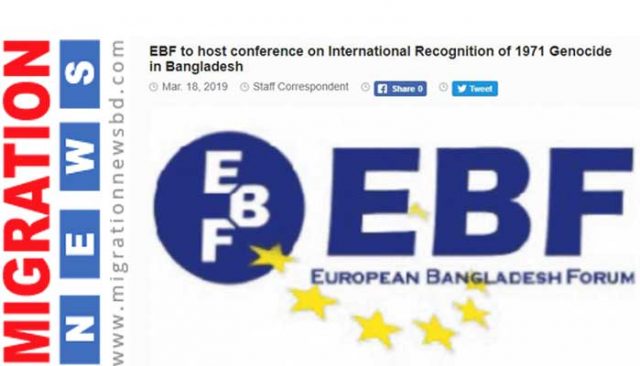 European Bangladesh Forum, a platform of Bangladeshi Europeans, will organize an international conference on 23rd March 2019 at Het Nutshuis in The Hague from 11 a.m. to 4:30 p.m.

On the day an international conference on the “International Recognition of 1971 Genocide in Bangladesh” will be held and a film, BLOCKADE on the resistance of American and Bangladeshi citizen in America in 1971 will be screened, according to press release.

A number of experts with international reputation, working on this area from the U.K. America, Germany, Netherlands, Finland and Bangladesh will be participating in the discussion.

The conference will be chaired by Jakob de Jong, Director, The Hague Peace, The Netherlands.

Video messages of Dr. Meghna Guha Thakurta and Dr Nuzhat Chowdhury from Dhaka will also be screened on the day. Both are the family members of the martyred intellectual families.

Apart from the conference, there will also be a silent demonstration in front of the International Court of Justice in the Hague demanding international recognition of the 1971 Genocide in Bangladesh by Pakistan army and punishment to the perpetrators.

EBF has also organized a Photo exhibition displaying the brutality and killings by the Pakistani army and their local collaborators during the liberation war of Bangladesh in 1971.

It may be mentioned that the 1971 Genocide in Bangladesh perpetrated by the Pakistan military and their local Bengali and non-Bengali collaborators is one of the worst mass atrocities that the world witnessed in the 20th century.

This number of people killed by the Pakistani Army is the highest in such a short period, as the Second World War cost lives of 60 million people, but that War lasted for 6 years and spread over three continents.

The international community has discriminated against the large-scale genocide in Bangladesh in the run up to its liberation in 1971.

As per history, never so many people have been slaughtered in such a short time. But unfortunately, the international community on the whole has been silent in regard to 1971 genocide in Bangladesh, says a Press release of EBF.