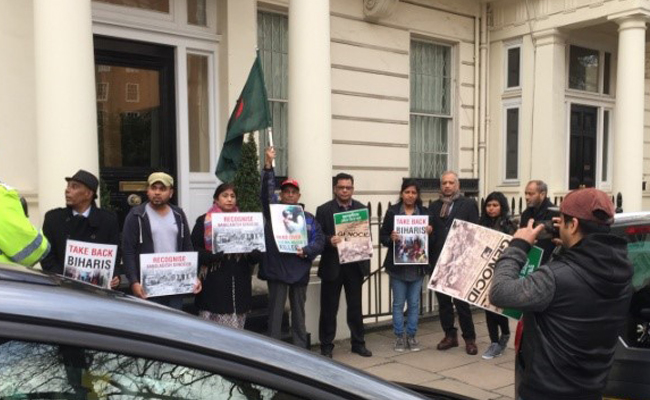 A protest demanding indictment and prosecution of 195 Pakistani military officials accused of acts of genocide and war crimes, that Pakistan take back stranded Pakistanis-Biharis from Bangladesh, that Pakistan should compensate rape survivors and the families of victims and pay back what Pakistan owes Bangladesh, half of the wartime reserve of undivided Pakistan was held on 22 March outside the Pakistan Embassy in West London.

They further said that during the conflict in 1971 Pakistani military forces were involved in mass killings in Bangladesh in 1971. To date we are not aware of any such trial. Instead Pakistan has objected to Bangladesh holding trials of its own citizens for collaborating with Pakistan which is meddling in Bangladesh’s internal affairs. There are also allegation of Pakistan’s intelligence agencies supporting and encouraging Islamist terrorists in Bangladesh. A memorandum with those demands were handed in addressed to Pakistani Ambassador Syed Ibne Abbas.