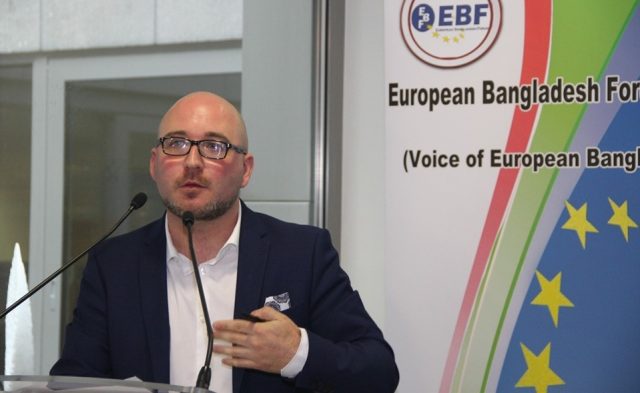 A recent event in Brussels hosted by the European Bangladesh Foundation (EBF) allowed European politicians, counterterrorism analysts and activists to come together and look at extremism in South Asia. It was a welcome change to hear new thoughts and ideas. Bangladesh is always accused of shrinking the democratic space which supposedly fuels radicalism. In Europe we have democracy coming out of our ears, yet still have all the same problems.

The conference was full of hope and dismay. Speakers acknowledged that extremism is not confined to individual religions. Dogma, ignorance and arrogance is unfortunately a universal phenomenon. The rise of white nationalism and terrorism in Europe share the same variables which are shaping Hindu, Sikh, and Islamic extremists in South Asia. Islamophobia and anti-Sharia movements have created just as much hatred and social division as Mawdudi and Qutyb.

Perhaps psychologists are in a better position to look at the causes of radicalism rather than politicos and national security types. The United Nations is doing exceptional work in promoting international benchmarking and cooperation in the fight. President Obama launched the Global Counter Terrorism Forum (GCTF) top help countries look at deradicalization.

Extremism isn’t confined to a vacuum. You aren’t often borne into extremism, radicals often have traits that make you susceptible to being drawn to crime and anti-social behavior. Ideology is the prime engine for radicals. It gives them a framework which legitimizes their views and actions.

Al-Qaeda’s engineers have been shoved aside for Islamic States lone wolves. Pakistan unfortunately is still married to its approach of financing militants to undermine its neighbors nearly 20 years after 9/11.

Bangladesh is in prime position to help the world understand the folly of simplistic models of countering extremism. The ‘Pothole’ theory was a fashionable trend launched after 9/11 which believed that giving power to radical Islamists would help them moderate.

The theory being that when radicals and fundamentalists were faced with the banality of governance they would change. Black flag waving radicals who loved suicide belts, crushing toleration and democracy would magically turn into moderates and sensible politicians.

Militancy rose in Bangladesh when Jamaat-I-Islami ministers came into power with the Bangladesh Nationalist Party (BNP) government in 2000. Jamaat ministers shielded militants who were attacking their rivals in the Awami League and the Communist Party. They conspired with ultra-nationalists and crooks like Lutfozzaman Babar to conspire to murder Sheikh Hasina and Awami League senior leaders like Ahmed SAMS Kibria. Kibria was a star at the United Nations and a respected international economist.

His murder at the hands of HUJI-B shocked the international community. BNP leaders were pulling the strings. HUJI-B also tried to kill the British High Commissioner. Things began to change as a result as international pressure rose.  The 21 August grenade attack of 2004 is still something which hangs over public life in Bangladesh.

Counterterrorism analysts should look to Bangladesh as a laboratory. Its made mistakes and has also had major success in combating extremism. But we have to be strong enough to look at our own misgivings.

When the Awami League saw that the Jamaat and the BNP was beginning to fracture should they have helped them reform? When BNP and Jamaat were setting fire to buses full of innocent civilians to make a political point should they have invited them back to the table?  It’s a difficult question. There is never an easy answer. If that had happened with Donald Trump in office would the US response have been different to Obama and Hillary Clinton’s? We haven’t forgotten when she sent her brother Tony Rodham to do unauthorized diplomacy with Khaleda Zia in New York.

The British government has also made a lot of mistakes and learnt from them. Mistakes which had a major impact on Bangladesh. An old colonial hangover if you must. In 2003, the British were going to subcontract counterterrorism policy to the now convicted war criminal Chowdhury Mueen Uddin. We helped to torpedo that effort.

Bangladesh activists helped to save a generation of British Muslim school children from having to learn about Maulana al-Mawdudi and Sayed Qutyb for three hours per day. I was leaked an OFSTED report from a whistleblower in 2002. Educationalists in the UK were going to make Jamaat the premier guardian of Muslim minds funded by the British taxpayers.

British charities and civic organisations are now flourishing after Jamaat figures were driven out of prestigious trustee roles.

Chowdhury Mueen Uddin, the Secretary General of Jamaat-i-Islami in the UK has a diminished role now. He deserves to face British justice. British governments have successively worried that taking on Jamaat would lead to civil unrest and push radicals underground. Sometimes taking on radicals and arguing is better than talking to them or giving them a platform.

Radicals are bullies at the end of the day. Driven by a will to power and hatred. That’s why they can’t cope with abstracts. It makes them intolerant, which leads to hate and ultimately violence. Extremism can be contained by the Rapid Action Battalion and America’s F16s and Navy SEALS. But they won’t solve this universal problem.

Talking and dialogue can help to get prominent reformers away from movements like Islamic State, the Ikhwan and Jamaat. But we need to understand that sunlight is often the best disinfectant.

When Pakistani diplomats at the High Commission in Dhaka were caught funneling money to militants they were expelled from Dhaka.

The international community should have got involved. Pakistan should have been sanctioned by the Commonwealth. Exposing state sponsorship of radicalism is also the elephant in the room. Jihadis love conflict. They thrive on it, so do their supporters in the ISI and Pakistani High Commission in Dhaka. Do we invite them to talk or do we invite others to help expose them and condemn? Again, it’s not an easy answer.

Jamaat is being forced to look at itself. That’s a good sign. We have to be strong enough to help those reformers change. As politicians its optional if they should be seen to be appeasing radicals, but for statesman it’s a necessity.

Mr. Chris Blackburn is a British political analyst. He was a recipient of a ‘Friend of Bangladesh’ award by the Bangladesh government in 2010 for his work in counter-terrorism and supporting the need for war crimes tribunals.

Challenges of Radicalization in Bangladesh and the Region